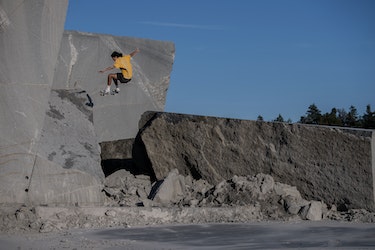 To create the perfect setting for the project, boulders were picked out by the Lundhs quarry team and rock walls were cut to create ramps for the skaters. The boulders were then processed into individual skatepark obstacles at Steinriket and installed back into the quarry. The location, the hard larvikite and the skaters’ ability to make the impossible possible, was the perfect fusion to create a truly spectacular film. Following the process from start to finish, the film shows the stone being cut out of the quarry, being shaped into skatepark obstacles and then being tested out by the skaters themselves. 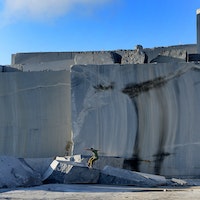 Launching globally, the film and project will give Larvik and Lundhs Real Stone worldwide exposure – showing Larvik and the unique properties of larvikite in a new and extraordinary way. 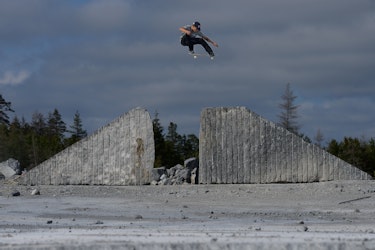 The global stars, including Larvik-born skater Didrik Galasso, put larvikite to the ultimate test by skating on the material in raw nature. Didrik has built up a big international profile as a skating pro through film projects and social media. He has 141,000 followers on Instagram and works full-time as a professional skateboarder thanks to contracts with Enjoi Skateboards and Nike. Torey Pudwill from the USA, Chris Haslam from Canada and Angelo Caro from Peru also joined Didrik for the filming.

"It's extra fun to skate on larvikite, because it's very hard. It makes the board glide better." - Didrik Galasso. 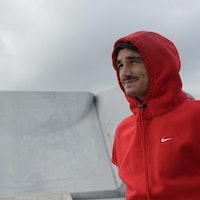 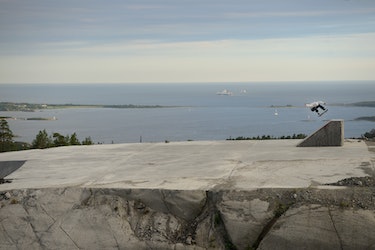 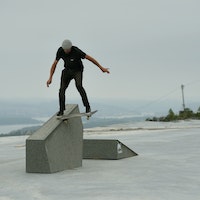 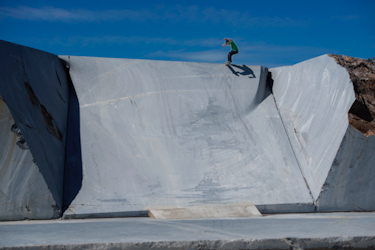 A rock wall was cut into a ramp in the quarry so that the skaters would get enough speed. Here, Angelo Caro puts it to the test. Photo: Gaston Fransisco /Red Bull

The project was brought to life through the collaboration between Red Bull, Lundhs and Steinriket. It all started with Andreas Mogster, athlete manager for Red Bull in Norway, who is also from Larvik, wanting to gather the skate elite in his hometown. Having grown up skating in the town square on larvikite blocks, his idea was to create skatepark obstacles out of the material, adapted for the best skaters in the world.

Lundhs thought the project was exciting and wanted to contribute. An important part of the project was to offer the skate elements back to the Larvik community to create a new skatepark in the town.

It took a lot of work to manage the project and make it happen, first and foremost in terms of safety but also in terms of practicality. But with careful planning and management, the project became a reality and a success. All of the skatepark elements and obstacles that were created at Steinriket out of larvikite are now installed on Furumoa – the town square – to the delight of the local skaters. 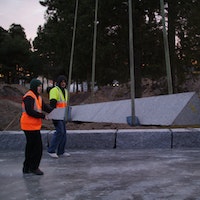 Herman Stene and Didrik Galasso are watching the obstacles are being installed at Furumoa, Larvik.