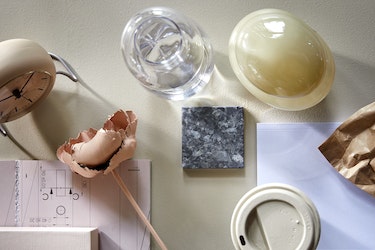 The Lundhs Real Stone collection comes in four colourways, each one as versatile as the next when it comes to working with different colour schemes. Here, Colour Designer and Expert Dagny Thurmann-Moe and her KOI Colour Studio take a look at how our Larvikite natural stones - Lundhs Royal, Lundhs Emerald and Lundhs Blue - can be paired beautifully with three different types of neutral colour palettes. 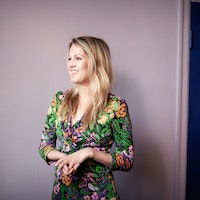 An increasingly popular colour choice within interior design, the warm and inviting terracotta backdrop in this first moodboard is a beautiful pairing to the Lundhs Royal natural stone. The lightest in the Lundhs Real Stone collection, Lundhs Royal is, perhaps not surprisingly, a perfect match to any new neutral colour palette, acting as both a contrast and complementary tone to the chosen hues.

As an extension of this colour palette, the addition of warm wood textures and tones, as shown here in this moodboard, can help to create a wonderfully cohesive and interesting neutral colour scheme.

“When we combine Lundhs Royal with a warm colour, like Corbusiers 32122, the colour becomes a contrast between the stone and its surroundings, highlighting the best of both. The grey-blue stone turns into an elegant element in the room, it will stand out, whilst also dressing the surrounding terracotta tones.” Dagny Thurmann-Moe 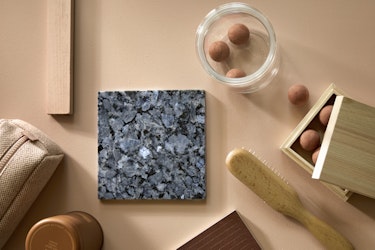 Seen here in a matte finish, called honed, the Lundhs Blue natural stone is blue, grey, shiny and deep, as well as exceptionally beautiful. The matte surface makes the colours in the stone brighter and lighter than with a polished finish - it is almost delicate and pale in its appearance whilst at the same time has a clear presence.

Surrounded by Jotun’s Curious Mind 11174, which is a pale, dusty grey-yellow hue, the stone plays along with the colour and appears mild and refined. Dagny and the KOI Colour Studio team have chosen to work with ‘powder tones’ in the palette, which consist of pale terracotta, pale pink, off white, beige, mild fresh yellow tones, and some natural coloured recycled paper. It feels comfortable and calm. The palette can also be combined with all sorts of wood for a textured and natural finish. 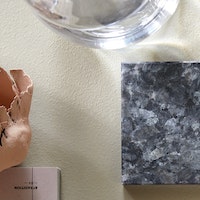 Mustard tones or ochres can seem quite daunting at first but used in the right way they can act as the perfect neutral backdrop to a variety of schemes. Combined with Pure & Original’s Old Ochre paint, the green undertones in the Lundhs Emerald natural stone fade slightly, leaving the stone to appear a dark, deep black. In addition, the polished surface of the stone, as shown here, makes the deeper and darker shades even more apparent.

The darkest in the Lundhs Real Stone offering, Lundhs Emerald acts as a dramatic focal point and becomes the statement piece in this palette. It provides a contrast to the rest of the colours, and along with the deep ochre, it becomes an intriguing element of the scheme, acting almost like a piece of jewellery.

The ochre tones can be expanded further, towards both reddish brown and clearer yellow tones. A surprising additional element, Dagny and her team have chosen to add a minty green tone, as it sits and contrasts beautifully against the other shades. A versatile colour arrangement, this palette can be combined with both warm and cold as well as light and dark wood.

“It is interesting to see here how the surface is not flat, but that the natural depth of the natural stone really comes out.” Dagny Thurmann-Moe 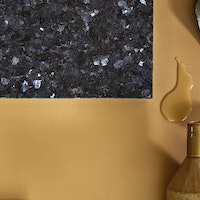 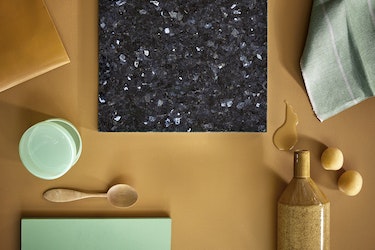 If you would like some Lundhs Real Stone samples for your own moodboard at home, you can now order samples from our webshop page. If you have any questions about any of our stones, please do not hesitate to get in touch!